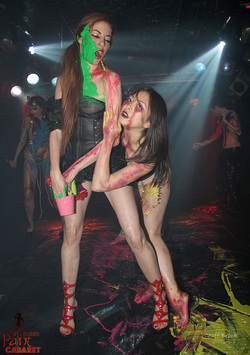 _A sexy unique rock show with fun and paint!

The Alternative Paint Cabaret is the first and only performance group in the world to create the unique mixture of a cabaret show, alternative music and high quality body paintings.
The group is combined of musicians, singers, dancers and performers, all come together on stage to make a body painting spectacle never been seen before.
Imagine flying ballerinas, a live band, beautiful girls and guys and of course- a lot of paint, all together on one stage!
The show is built with different performances for each song, with a cool and funny moderator in between.
The vibe is always sexy and fun, though each show has a serious main theme as a guideline. 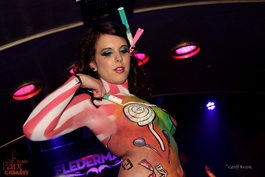 Plastic, The Show: The Alternative Paint Cabaret's current show is called Plastic and is discussing the artificial world of beauty and fashion, through the group's usual sexy and fun eyes. The show deals with topics such as plastic surgeries, self-image, what hides behind the glamorous fashion world, between the models, photographers and the public image, ending with self acceptance and love.


The Music: The music guideline is alternative, from pop-rock and punk, to dark 80s, goth and industrial. The music in the show is combined with playback, live covers and live original songs.

The Alternative Paint Cabaret was formed in early 2011, and already performed in The World Body Painting Festival, the biggest body painting festival in the world and in events such as the Art Surface art festival in Vienna.